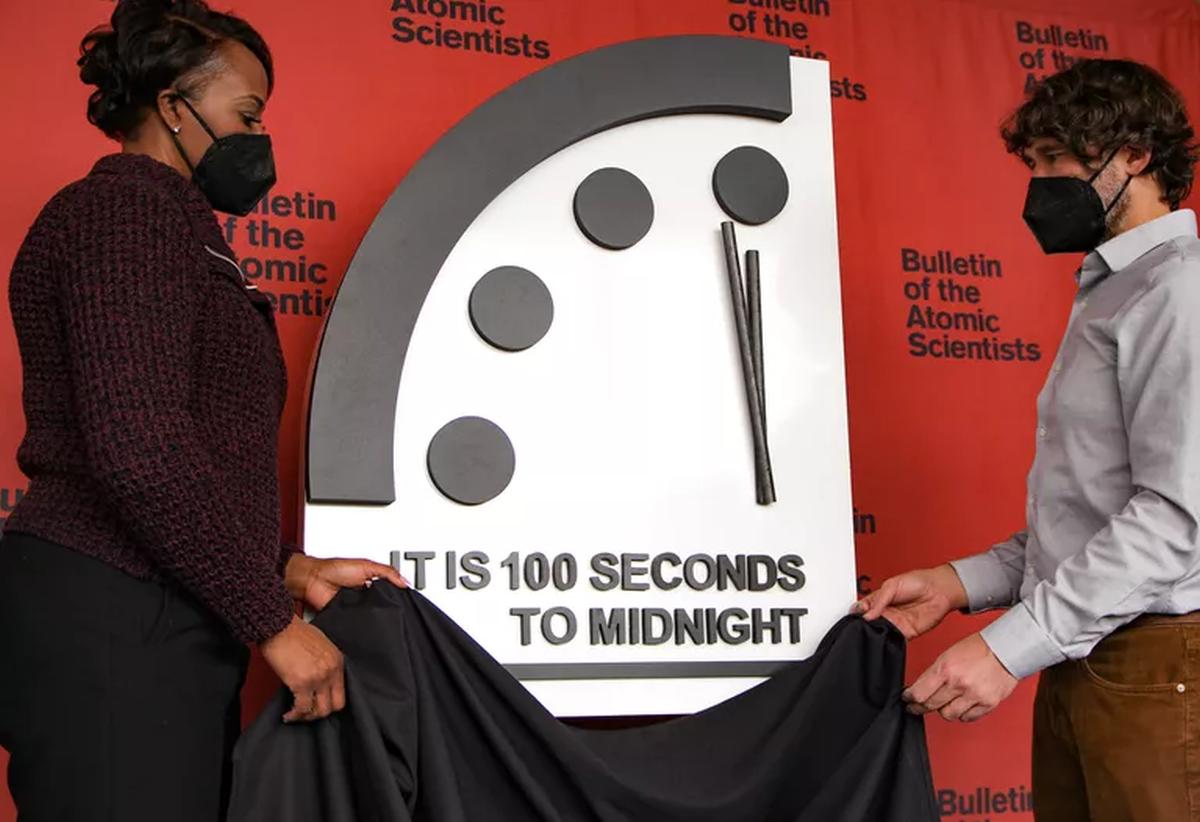 by Jack Heinemann, Professor of Molecular Biology and Genetics, University of Canterbury

Jack Heinemann does not work for, consult, own shares in or receive funding from any company or organisation that would benefit from this article, and has disclosed no relevant affiliations beyond their academic appointment.

In less than 24 hours the Bulletin of the Atomic Scientists will update the Doomsday Clock. It’s currently at 100 seconds from midnight – the metaphorical time when the human race could destroy the world with technologies of its own making.

The hands have never before been this close to midnight. There is scant hope of it winding back on what will be its 75th anniversary.

The clock was originally devised as a way to draw attention to nuclear conflagration. But the scientists who founded the Bulletin in 1945 were less focused on the initial use of “the bomb” than on the irrationality of stockpiling weapons for the sake of nuclear hegemony.

They realised more bombs did not increase the chances of winning a war or make anyone safe when just one bomb would be enough to destroy New York.

While nuclear annihilation remains the most probable and acute existential threat to humanity, it is now only one of the potential catastrophes the Doomsday Clock measures. As the Bulletin puts it:

The Clock has become a universally recognized indicator of the world’s vulnerability to catastrophe from nuclear weapons, climate change, and disruptive technologies in other domains.

At a personal level, I feel some sense of academic kinship with the clock makers. Mentors of mine, notably Aaron Novick, and others who profoundly influenced how I see my own scientific discipline and approach to science, were among those who formed and joined the early Bulletin.

In 2022, their warning extends beyond weapons of mass destruction to include other technologies that concentrate potentially existential hazards – including climate change and its root causes in over-consumption and extreme affluence.

Many of these threats are well known already. For example, commercial chemical use is all pervasive, as is the toxic waste it creates. There are tens of thousands of large scale waste sites in the US alone, with 1,700 hazardous “superfund sites” prioritised for clean-up.

As Hurricane Harvey showed when it hit the Houston area in 2017, these sites are extremely vulnerable. An estimated two million kilograms of airborne contaminants above regulatory limits were released, 14 toxic waste sites were flooded or damaged, and dioxins were found in a major river at levels over 200 times higher than recommended maximum concentrations.

That was just one major metropolitan area. With increasing storm severity due to climate change, the risks to toxic waste sites grow.

At the same time, the Bulletin has increasingly turned its attention to the rise of artificial intelligence, autonomous weaponry, and mechanical and biological robotics.

The movie clichés of cyborgs and “killer robots” tend to disguise the true risks. For example, gene drives are an early example of biological robotics already in development. Genome editing tools are used to create gene drive systems that spread through normal pathways of reproduction but are designed to destroy other genes or offspring of a particular sex.

As well as being an existential threat in its own right, climate change is connected to the risks posed by these other technologies.

Both genetically engineered viruses and gene drives, for example, are being developed to stop the spread of infectious diseases carried by mosquitoes, whose habitats spread on a warming planet.

Once released, however, such biological “robots” may evolve capabilities beyond our ability to control them. Even a few misadventures that reduce biodiversity could provoke social collapse and conflict.

Similarly, it’s possible to imagine the effects of climate change causing concentrated chemical waste to escape confinement. Meanwhile, highly dispersed toxic chemicals can be concentrated by storms, picked up by floodwaters and distributed into rivers and estuaries.

The result could be the despoiling of agricultural land and fresh water sources, displacing populations and creating “chemical refugees”.

Given that the Doomsday Clock has been ticking for 75 years, with myriad other environmental warnings from scientists in that time, what of humanity’s ability to imagine and strive for a different future?

Part of the problem lies in the role of science itself. While it helps us understand the risks of technological progress, it also drives that process in the first place. And scientists are people, too – part of the same cultural and political processes that influence everyone.

J. Robert Oppenheimer – the “father of the atomic bomb” – described this vulnerability of scientists to manipulation, and to their own naivete, ambition and greed, in 1947:

In some sort of crude sense which no vulgarity, no humour, no overstatement can quite extinguish, the physicists have known sin; and this is a knowledge which they cannot lose.

If the bomb was how physicists came to know sin, then perhaps those other existential threats that are the product of our addiction to technology and consumption are how others come to know it, too.

Ultimately, the interrelated nature of these threats is what the Doomsday Clock exists to remind us of.

This article is republished from The Conversation under a Creative Commons license. Read the original article.