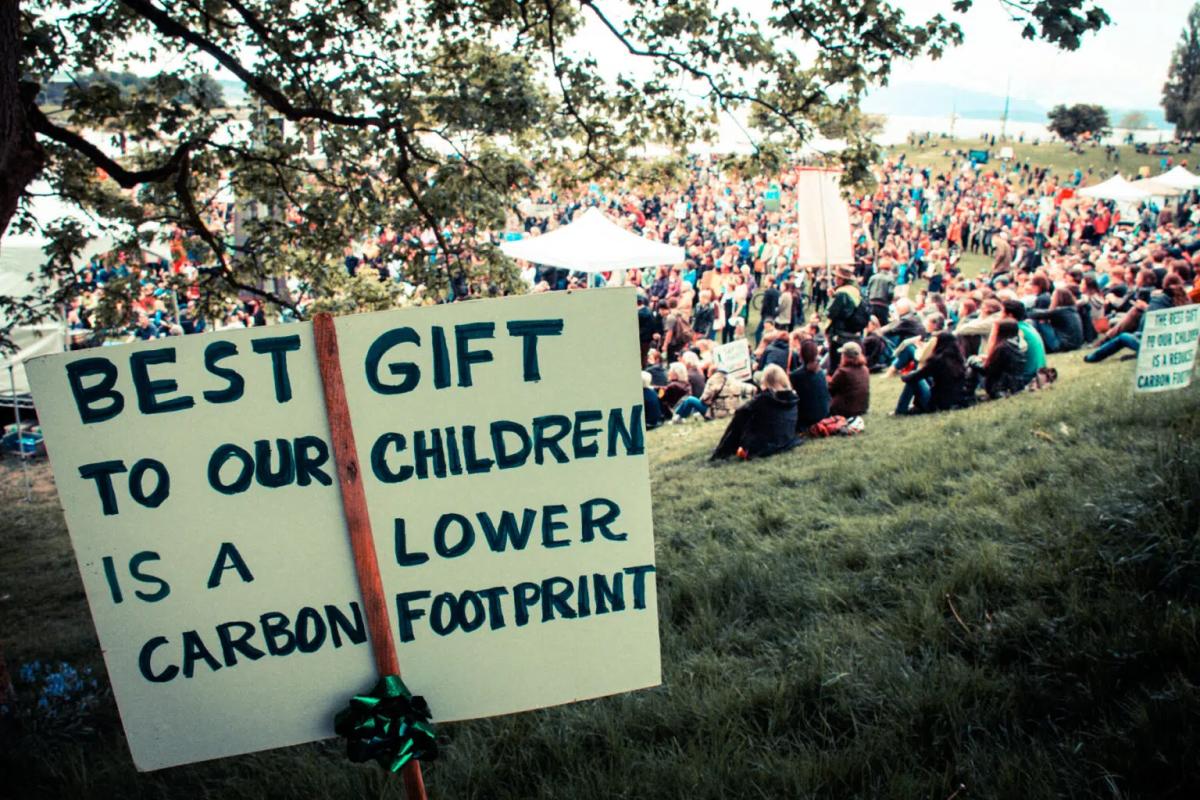 Powered by fossil fuel funding, PR agents have used astroturfing, “manufactured consent,” and other techniques to furtively shape public perceptions in favor of their polluting clients.

Editor’s Note: This is the first DeSmog article in a new column, Gaslit, which will navigate society’s dysfunctional relationship with fossil fuel disinformation.

For decades, fossil fuel companies have been using PR firms to polish, reinvent, and fabricate their image; protect their reputation; and greenwash their activities, in ways that we are still trying to fully understand.

It’s not just that they need to, it’s also that they have the power and money to do so.

“When you make a fortune producing fossil fuels and you don’t wanna give it up, you will spend a lot of money to be able to do that. You’ve got ample funding, so you can afford the best PR firms and huge campaigns,” Oklahoma State University emeritus professor and sociologist Riley Dunlap said. “So, that’s why they do it. To protect their interests and because they can easily afford it.”

And because oil and gas companies and their trade groups know that PR agents will carry out their work in the shadows. PR firms have developed what authors Melissa Aronczyk and Maria I. Espinoza refer to in their book Strategic Nature as “strategies of silence”: the role of PR agents has been to create and execute strategies for their clients while remaining completely invisible.

In fact, they have done this so well that, to this day, there is very little literature on the role of PR firms in shaping climate policy and discourse.

As DeSmog has reported, a recent study, co-authored by Brown University researchers Robert Brulle and Carter Werthman, has begun “lifting the veil of secrecy that envelops PR firms and their work.” Their study challenges the notion that PR agents are neutral mediators merely working to carry out their clients’ wishes. To the contrary, PR agents are actors involved in the processes of shaping environmental culture, policy, and public discourse, as well as creating corporate-image and marketing strategies.

“The PR agencies themselves are the active developers of these techniques,” Brulle said. “We’re not giving the whole picture if we don’t include them.”

According to the study, the origins of PR in the political context can be found, among others, in the work of Edward Bernays, often referred to as “the father of public relations” (although Ivy Ledbetter Lee, who started his PR firm 25 years before Bernays, might be better suited to hold this title). Developing his ideas in the 1920s, Bernays’ thought built on existing theories about the role of the public and its relationship to PR within the democratic political context.

He was the first to imagine the public as a “strategic resource,” Aronczyk and Espinoza write in Strategic Nature. The public, in other words, was not an end in itself but “a means for other ends.”

Using the public as a “strategic resource” would become a popular strategy for corporate propaganda. PR firms developed a tactic which engaged “third-party mobilization” such as grassroots involvement in order to create the perception of widespread support for an issue, position, campaign, or policy. According to the study by Brulle and Werthman, third-party mobilization is the second-most common PR tactic.

“The idea of a third party spokesperson is that you get somebody else that’s credible to say what you want them to say,” Brulle said. “It creates this idea that there’s grassroot support for [something], when in reality, it’s all a fabrication of the PR agency or the corporation.”

Bernays also transformed the phrase “manufacturing consent,” which writer Walter Lippmann originally intended as a critique of political propaganda. One of Bernays’ publicity ideas was so effective that it became a way of life.

Working on behalf of the tobacco industry in 1929, he hired women to march in the Easter Sunday Parade in New York City while smoking their “torches of freedom,” a symbolic phrase used to push women to smoke in public despite social taboos at the time. The “Torches of freedom” campaign was created to target women consumers and exploit their desires for freedom, when freedom was, in fact, considered transgression. Campaigns like this one led to higher rates of smoking among women.

Not only did Bernays make “manufacturing consent” possible, he made it “desirable,” Aronczyk and Espinoza argue. The public was PR’s best resource. Even Bruce Harrison, a pioneer of “corporate environmentalism” —  when companies consider environmental themes in their decision-making process — thought that grassroots involvement was crucial for building public support for the oil and gas industry and that without it, the industry would suffer.

But to succeed, fossil fuel companies also needed to be seen as “trustworthy” and “socially responsible,” Brulle said. In other words, they needed legitimacy.

At its core, PR is about legitimacy, and about using “the concepts of truth or facts to persuade others that your view is the best one” as a way to garner support, according to Strategic Nature. Ideas and information, in this context, aren’t absolute categories; they need to be constructed and shaped in order to appeal to different “publics” — or audiences — in different contexts.

This is why PR isn’t only invested in communication. It also creates dimensions where certain ideas and information, such as “clean coal” or “carbon footprints,” can be chosen over others and made to seem legitimate — what Aronczyk and Espinoza call the creation of “contexts of communication.”

Third-party mobilization was especially popular after Barack Obama was elected U.S. President in 2008, when fossil fuel companies funded — and PR firms designed — so-called astroturf campaigns to create the perception of existing grassroots efforts to oppose climate change policies. Astroturfing hit a peak around 2009, when Congress was about to pass climate legislation, which is generally when they “crank up their PR machines,” Brulle said.

“I think one of the reasons we’ve seen some decline in the importance of astroturf groups is that the oil corporations and big conservative philanthropists like the Koch brothers have been so successful in getting the Republican party to buy into their agenda and do their bidding that perhaps there’s no need for these other activities,” Dunlap said.

One of the reasons Big Oil’s disinformation campaign has been, in fact, so effective is that it has succeeded in turning a physical problem — the planet warming — into political propaganda by means of “social technology,” as Brulle calls it. According to Strategic Nature, the environmental problem became “the wrong kind of problem” when PR firms turned it into a problem of politics, of “individual attention,” of information — of anything other than what it actually was: “a problem of existence.”

Separation from “the environment,” encouraged by what is historically defined in Western thought as dualism — basically, nature on one side, humankind on the other — has promoted the illusion that there is an “outside.” (This idea sits in contrast to many Indigenous perceptions of human-nature relationships). British philosopher Timothy Morton says that if you begin to think of the biosphere as a dreaming mind, you will find that everything in that biosphere is a symptom and expression of the biosphere itself. There is no outside. The environment is only perceived as external.

This framing was convenient for PR firms who needed to put space between “the environment” and its degradation and those responsible for it — especially, corporations.

Some PR agents in the early 1970s understood that managing environmental problems wasn’t enough. If they wanted to control the social perception of companies’ responsibility for the environment, and consequent political action for it, they had to anticipate problems, and construct them.

Aronczyk and Espinoza write that W. Howard Chase, founding member of the Public Relations Society of America, was one of the proponents of this idea of “issue management.”

Chase’s idea for the 1970s Crying Indian ad campaign can be considered a key moment in constructing one of the most flawed cultural narratives around the climate crisis: that just like individuals are singularly responsible for emissions and pollution, it’s individuals — not corporations — who are singularly responsible for solving these problems.

In the ad, a caricature of an American Indian man (played by an Italian-American actor) paddles a canoe into an industrial waterway. Coming upon a littered shoreline, he sheds a single tear when a person tosses trash out of a passing vehicle and it lands at his feet. A narrator proclaims, “People start pollution. People can stop it.”

The oil, gas, and plastics industry was more than happy to deviate attention from production (its sphere) to consumption (the general public’s). And we know today that the myth of individual responsibility, which PR agents developed — by using the public as a resource, nonetheless — has been one of the most successful communications strategies of all time.

PR has played a key — and undeniable — role in both the way we perceive the fossil fuel industry and the way we understand environmentalism and environmental issues today. And it’s done so to the extent that, as Strategic Nature argues, it’s impossible to comprehend the role of the environment in our everyday lives “without understanding how something called ‘the environment’ has been invented and communicated to us throughout our lives” in the first place.

Stella Levantesi is an Italian climate journalist, photographer and author. Her work has been published in The New Republic, Nature Italy, Wired Italy, and the Center for Investigative Journalism in Puerto Rico, among others.