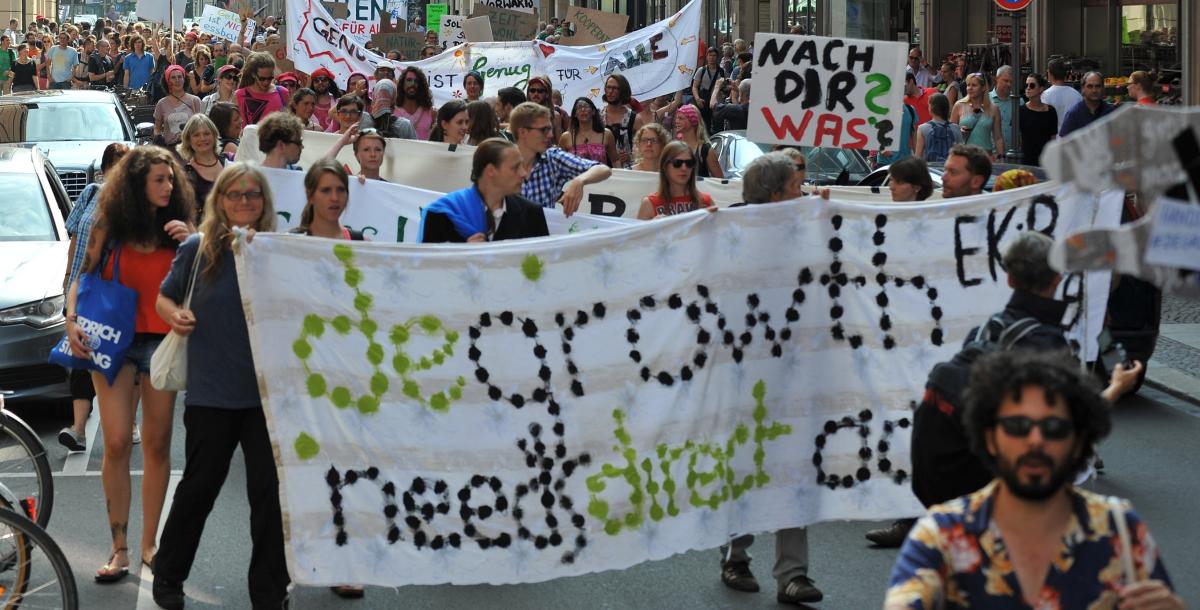 Opinion: ‘Degrowth’ Isn’t Just About the Economy. It’s About Culture.

To save the planet, the degrowth movement calls not for us to sacrifice prosperity, but to redefine it.

THE GLOBAL CONVERSATION about climate change has revolved largely around a single, misguided idea: that we can replace carbon-intensive technologies with cleaner ones and reach the goal of net zero greenhouse gas emissions without fundamentally altering our economy. In other words, that we can achieve, and indefinitely maintain, green growth.

But a competing narrative argues that infinite growth on a finite planet is impossible, and that even supposedly green technologies will perpetuate the extraction of natural resources and the destruction of the natural environment. Even if these technologies help us mitigate climate change to an extent, they might backfire, for example, by disrupting biodiversity. In this narrative, the underlying problem lies not in the so-called cleanliness of our technologies but in our compulsion to keep growing our economies.

Proponents of this second view argue that to preserve the planet, we must reduce our consumption of resources, a strategy that has come to be known as degrowth. This approach calls for us to shrink parts of our economy, and to move away from measures such as gross domestic product as indicators of economic health.

Many scientists, politicians, and commentators have disparaged degrowth as unrealistic, and asserted that there simply isn’t enough political will to pursue it. We must act on climate now, they say, and we must act within the parameters of our current economic system. There is no time for a revolution.

This, arguably defeatist, perspective is in part the result of a misunderstanding of what degrowth really stands for. Degrowth doesn’t imply a radical decline in living standards, as some commentators have suggested, nor does it mean that poor people would become even poorer. This is because degrowth calls not only for reducing the extraction of resources but also for distributing those resources more equitably. Neither does degrowth mean that all sectors of the economy would shrink; sectors less dependent on resource extraction, such as education and health care, could keep expanding.

But even more importantly, degrowth is too often portrayed merely as an economic idea when it is, in fact, just as much a cultural notion. The culture of degrowth calls for us to view ourselves as stewards of the planet. It pushes us to recognize that our relationship with the natural environment is a two-way street — that we must take care of nature if we want nature to take care of us. And it calls for us to respect our planet’s limits, to look out for other species, and to recognize that our own fate is tied up with the health of the ecosystems we inhabit.

A culture of degrowth sees justice as intergenerational, and respects the rights of the world’s future inhabitants.

What would it take for society to embrace degrowth as a new cultural paradigm?

We can start by questioning the underlying ideologies that have enabled our economic system for decades, including extractivism, the idea that the earth is ours to exploit, and speciesism, the idea that human beings are morally superior to all other species, which fuels the widespread belief that non-human species are essentially disposable. At the same time, we must beware of ageism, the idea that adults know best. Children’s imaginations of alternative worlds and futures will be essential in creating a cultural shift. Why not start publishing children’s writings and drawings on the opinion pages of major newspapers?

A culture of degrowth sees justice as intergenerational, and respects the rights of the world’s future inhabitants.

A key step is for our culture’s gatekeepers — curators, editors, artists, influencers — to diversify the conversation about climate solutions beyond clean technology and decarbonization. Journalists, editors, and commentators, in particular, carry tremendous power to set the cultural agenda, especially in the world’s more democratic countries. It is time they use it.

It’s worth remembering, for example, that our current global system of infinite growth didn’t emerge by chance. It was partly an outgrowth of cultural forces that took hold in the post-World War II era: a revolution in advertising, media coverage that stressed the benefits of capitalism and globalization, and a drumbeat of Hollywood films depicting material wealth as the symbol of success.

Similar forces could be marshalled to drive a cultural shift toward degrowth.

Take the arts and entertainment. The acclaimed Indian novelist Amitav Ghosh argued in his 2016 book “The Great Derangement” that climate change was conspicuously absent from works of fiction. Yet today, climate and the environment remain mostly in the domain of nonfiction. With a few notable exceptions — such as Maja Lunde’s “The History of Bees” — bestselling novels and blockbuster movies of recent years have hardly engaged the question of our relationship with nature.

Education is another space that shapes culture. Many of the world’s education systems are currently focussed on churning out productive workers who can keep the infinite-growth economy spinning. Even at so-called elite educational institutions, critical thinking too often equates with problem solving for infinite growth. Our education systems — currently preoccupied with STEM subjects, and with imparting technology skills demanded by corporate employers — must place greater emphasis on creativity, imagination, and political engagement. We need to be able to imagine alternative futures before we can bring them into being, and degrowth is no exception.

An objection I often hear when I speak about the culture of degrowth is that cultural change takes time, and we are out of time when it comes to climate change. Yet, history teaches us that rapid cultural and political change is possible. Just take the impacts of social movements like #MeToo or Black Lives Matter that manifested within months, if not weeks. Skeptics may be right that imposing degrowth policies from above is unlikely to work, but that doesn’t mean degrowth is impossible — it just means that the demand needs to come from below.

But is it realistic to expect that a critical mass of people might come to support degrowth? After all, our mainstream economic theory claims that people act rationally when they act in their self-interest. And acting in our self-interest often means accumulating wealth, which fuels infinite growth.

But it is no coincidence that our hearts break when we see environmental devastation first hand or that we are more likely to give up meat if we witness the conditions in which livestock are kept. Appreciation for natural beauty, compassion for other living beings, and a concern for the fate of humanity’s future generations are as much ingrained in us as self-interest, even if our culture of infinite growth has blinded us somewhat to these traits.

Ultimately, degrowth is inevitable. We will either choose this path voluntarily, or we will be forced into it violently and uncontrollably as a result of environmental disasters. If we want to prevent the suffering and tragedies that accompany such drastic shifts, we must bring about a culture of degrowth. And where the cultural winds blow, the political winds will follow.

Peter Sutoris, Ph.D., is an environmental anthropologist based at University College London, and the author of “Visions of Development” (Oxford University Press) and the forthcoming “Educating for the Anthropocene” (The MIT Press). More about his research can be found at www.petersutoris.com and he tweets @PSutoris.