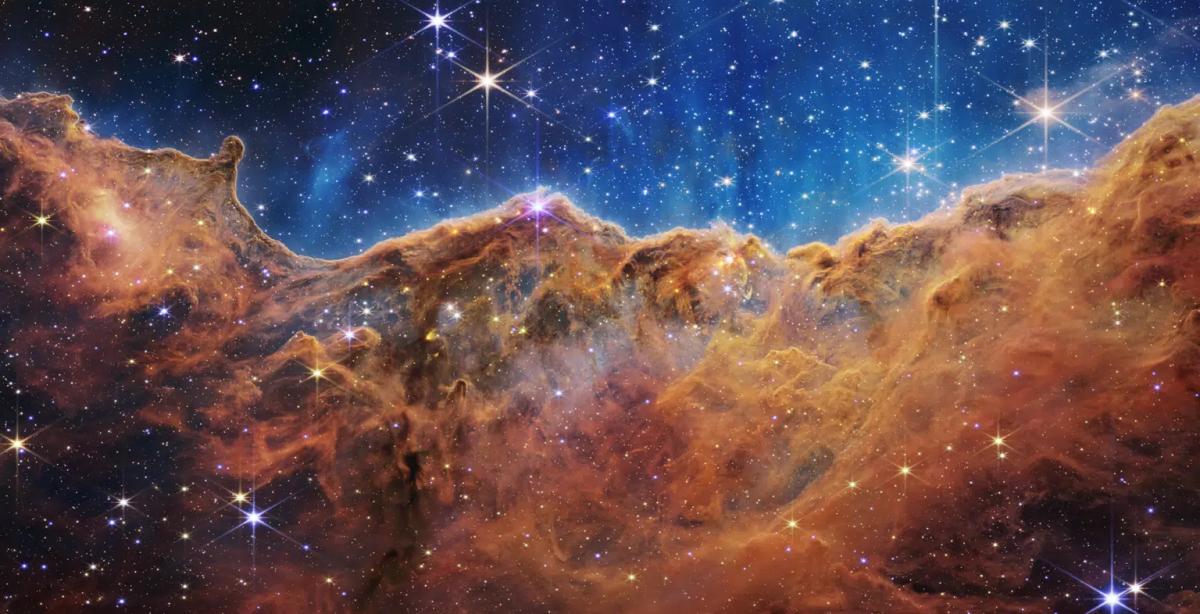 Reality Is Not What It Seems. And That Might Just Save the Climate

in Climate, Social Analysis
Reading Time: 10 mins read
A A

Anti-science rhetoric and special interests have pushed us to the edge of climate chaos. But just as quantum physics disrupted our view of matter and energy, quantum social change disrupts our beliefs about what’s possible, how fast, and by whom.

As the world gasped in wonder at the first images of our infant universe from the James Webb Space Telescope last month, we were reminded that human beings are still capable of acts that elevate us all and advance our collective potential.

“[When] my grandchildren … look up at a star, point to it and say ‘there’s life!’ — that’s going to be a moment more profound than the Copernican moment that took Earth out of the center of the universe. It’s going to put an end to cosmic loneliness,” said project team member Natalie Batalha, a planet hunter and astronomer at UC Santa Cruz.

But back on Earth, anti-science rhetoric and special interests have pushed us to the edge of climate chaos. Unless we act fast, Batalha’s grandkids may actually point to the star, exclaim “there’s life!”, pack their bags, and hop in the nearest space-Uber.

The biggest threat to climate action today is not the industry-funded deniers and skeptics left over from the 1990s. It’s the elite business and political leaders who advance incremental solutions to the most radical issue of our time. They say we can’t move too quickly lest we disrupt the economic order and throw society into a tailspin. Only a gradual phaseout of fossil fuels is realistic. And anyone who says otherwise is idealistic or naive.

Yet, it must be said now and moving forward: These power brokers are advancing solutions that will assure our mutual destruction. Gradual, incremental action may have worked decades ago, but now it guarantees our passage into a hell realm of runaway climate change. Countries must phase out fossil fuels fast or pay the price. Instead, they are using Russia’s invasion of Ukraine to justify a huge new build-out of fossil plants, pipelines, and export terminals that could operate for 50 years or more.

After decades of limited progress on climate legislation, the U.S. Congress is poised to pass the first meaningful climate bill in a generation. True to the incrementalist mindset, however, the bill contains giveaways to the fossil fuel industry and even trades clean energy incentives for expedited regulatory approval for pipelines. Things are not looking good.

But what if our linear march towards doom is not baked in? What if we can leapfrog time and space? What if “reality” is anything but?

Cue quantum social change. This [r]evolutionary new academic discipline pioneered by former Intergovernmental Panel on Climate Change social scientist Karen O’Brien, PhD, panpsychologist Zhiwa Woodbury, science journalist Lynn McTaggart, and others, suggests that the mind-bending principles that describe the subatomic world are also relevant to our daily lives. Just as quantum physics disrupted our view of matter and energy, smashing the Newtonian paradigm of a fixed physical reality with predictable patterns of cause and effect, quantum social change disrupts our beliefs about what’s possible, how fast, and by whom.

To be sure, some might say that resorting to concepts from quantum physics is at best pseudoscience, at worst a form of magical thinking — albeit an understandable temptation in such desperate times. But this criticism misses the point. Quantum social activism invites us to think differently about familiar dilemmas, and see what new possibilities may open as a result. To paraphrase a truism attributed to Albert Einstein: We cannot solve our problems with the same level of thinking that created them. Quantum principles help us escape our mental ruts.

Entanglement. Complementarity. Non-locality. Potentiality. Indeterminacy. If harnessed by the climate movement, such concepts could open a portal to a clean energy transformation fast enough to stop us from crossing tipping points of no return. Even the merest mention of these mysterious-sounding terms is enough to send a thrill of possibility down the spine. But what do they mean and how can we apply them in three-dimensional reality?

“The biggest threat to climate action today is not the industry-funded deniers and skeptics left over from the 1990s. It’s the elite business and political leaders who advance incremental solutions to the most radical issue of our time.”

Entanglement in the quantum world means that particles are interconnected and never act alone. Even at great distances, a shift in one particle is instantaneously mirrored by the other. Einstein called these non-local effects “spooky action at a distance” because he could not explain them through classical cause and effect.

Every mass shooting reminds us how destructive and deadly social disconnection can be. Meanwhile, unhinged individualism and ego are behind the evisceration of human rights, rise of autocracy, and destruction of Indigenous cultures and the natural world. In contrast, community and connection are proven to insulate us from stress, give our lives meaning and allow us to be part of something “bigger.” The more entangled we are, the better we seem to do.

As a climate activist and former head of fossil fuel divestment non-profit Divest Invest, I have seen the power of entanglement firsthand. The movement to push investors to pull their money out of coal, oil, and gas started on a handful of American college campuses in 2012. Ten years later, 1,500 institutions with assets exceeding $40 trillion have divested, reinvesting in clean energy in many cases.

Divest-invest wasn’t a top-down movement. Once the idea was planted, campaigns popped up simultaneously all over the world. Diverse campaigners shared learnings and tactics online and at summits, far-flung groups adopted common talking points and financial arguments, and, ultimately, a distributed, self-organized collective moved a mountain.

The lesson is clear: As more and more like-minded change agents become entangled, momentum builds and the door opens to non-linear change. Systems theorist Mark Skelding explains this phenomenon by positing that we inhabit a “psychosphere” through which all sentience is entangled.

Non-locality is related to the idea of entanglement: What we do can have far-flung unseen and unexpected consequences. Technology is the great enabler of non-locality today, with the internet and countless apps allowing campaigners to organize global shows of solidarity at warp speed.

Complementarity is another quantum concept of great relevance to the climate movement. It holds that subatomic objects embody different forms, shape-shifting in a sense, depending on who is observing them, how, and when. The classic example is the famed double-slit experiment, which proved that light and matter each behave as both a particle and a wave.

“In a chaotic world, the right catalyst can create unpredictable impacts. Quantum leaps, non-linear change, true transformation — these are possible when people and movements embrace potentiality and the hope it can bring.”

On the human plane, it’s clear that we each exist as individual “particles,” or as Woodbury posits, “cells in the meta-organism that is Gaia.” But while Western thinking is still limited by a dualistic worldview (us v. them, hers v. mine), Indigenous cultures, the cycles of the natural world (moon phases, ocean tides), and fractals all attest to the wave-like dimension of reality — an uninterrupted flow of untold power. In truth, therefore, all of reality has a particle dimension and a wave dimension.

What are the implications if you, too, are both a particle and a wave? It means that we all have agency to join in and help power social movements. Just consider the wave of millions of youth globally who marched for climate justice in September 2019. They came together not because of some orchestration from on high, but because of their unified consciousness and concern around an issue with existential implications for their own generation. Where complementarity is nurtured — believed in — “I” becomes “we” and our limited capacity for change grows exponentially.

In these times, a radical evolution of our thinking about climate change and its desperate trajectory is required. Words like “radical” and “transformative” make energy incrementalists squirm but they need to wake up and smell our forests burning. It’s no secret that the world is neither on a path to rein in global temperature rise to 2 degree Celsius, much less the 1.5 degrees pledged in the Paris Climate Agreement. Indeed, the Paris targets themselves are beginning to look tragically inadequate, as new analysis catalogs the global human toll of climate-related extreme weather events at even current levels of warming. Nevertheless, complementarity reminds us that some aspects of the climate crisis are not “either, or” but rather “both, and.” For example, the invasion of Ukraine has prompted Europe and the United States to expand fossil fuel infrastructure to meet current energy needs. On the other hand, Europe also plans to radically cut gas consumption in a way that would have been unthinkable a year ago.

As applied to social change, however, quantum potentiality is the crown jewel. It is very different from classical probability, which tells us that the chance of preserving a safe future is virtually nil. As the grandfather of climate science, James Hansen, has said: The dice are loaded against us. Yet potentiality allows us to transcend probability to a boundless realm where quantum leaps are possible.

A vendor in Tunisia sets himself ablaze, and the Arab Spring rises up. A lonely young girl sits down outside the Swedish Parliament with a “Fridays for Future” placard, and the whole world responds. In a chaotic world, the right catalyst can create unpredictable impacts. Quantum leaps, non-linear change, true transformation — these are possible when people and movements embrace potentiality and the hope it can bring.

And all of this is supported by the final quantum concept at hand, indeterminacy. It is just what it sounds like: Nothing is fixed, nothing is predictable. A higher order can quite suddenly emerge from apparent chaos. A radical shift from our current trajectory is still possible. Amen.

Taking these concepts to heart can help all of us who fight for a better world. The news on almost all fronts is bleak, and resignation can seem like a reasonable option. O’Brien stresses that “beliefs matter.” If we believe that we can help speed transformative social change in time, we will act with much more energy, agency, and urgency. Staying in dulled paralysis will get us nowhere.

Quantum social change gives us a mental frame for re-activating our potential to solve the climate crisis. These concepts give each of us agency to transcend limiting beliefs, swap out isolation with community, lack with abundance, fear with love. Quantum social change is the ultimate rebuttal to energy realists and their incremental path to climate breakdown. This is not naive. It’s urgently necessary.

Perhaps getting to this crisis point was essential for us to wake up to the infinite possibilities of a quantum paradigm, to our unstoppable power as individuals and as the collective. While the James Webb Space Telescope promises to “end cosmic loneliness,” it might be wise to start with ending earthly loneliness.

Remember you are enmeshed in something larger, something vital — you are both a particle and a wave. Start rising.

Clara Vondrich is an attorney with a background in neuroscience. She was the inaugural director of the fossil fuel divestment and renewable energy investment start-up, Divest Invest, and is a current Public Voices fellow with the OpEd Project, in partnership with the Yale Program on Climate Change Communication.